When the Vancouver City Council is in session, Abundant Housing Vancouver will be providing a breakdown of important public hearings and housing-related motions.

At the end of the July 7th Council meeting, Council failed to take a vote to refer unfinished business to another date because they ran out the clock arguing over how and whether to refer unfinished business. As a result, when the scheduled end of the meeting arrived everything not yet handled got automatically pushed to this week’s council meeting.

A motion by Councilor Dominato to create a program for demonstration projects of ground oriented, missing middle type housing in the low density zones that cover most of the city.

Please support this motion by writing to council or requesting to speak in favour (deadline to register to speak is 1 hour before the start of the meeting).

This development will deliver two 6-storey buildings containing 157 units of secured seniors social housing, with 30% below housing income limits. The project is getting opposition from nearby single family residents. There is a letter generator on the providers website to write in support.

243 rental homes, with 53 moderate income rentals (20% of the floor area), located two blocks from the future Broadway & Granville Skytrain Station and a short walk to Vancouver General Hospital. This project adds needed rental and moderate income housing near a key employment center in the city.

A lengthy public hearing took place July 9th and 10th. Council was due to vote on the proposal on July 14, however one Councillor had not reviewed the section of the public hearing she missed. After a lengthy debate about how to proceed, Council referred the final questions and decision to the July 21st meeting.

Allow 6-storey rental buildings (with commercial on the first floor) in C-2 zones, outside of recent and upcoming area plans without a rezoning application. This is intended to shift more projects away from strata condos and create somewhat more rental housing.

Located two blocks from the future Broadway & Granville Skytrain Station and a short walk to Vancouver General Hospital, this project would add 243 rental homes, with 53 moderate income rentals (20% of the floor area), to this walkable, transit oriented section of Broadway. This site was originally to be a 16 storey building and received zoning approval at a January 16, 2018 public hearing. The builders have gone back for a second rezoning, as part of the Moderate Income Rental Housing Pilot Program (MIRHPP) in order to build more needed rental homes, including moderate income housing.

A lengthy public hearing took place July 9th and 10th. Council was due to vote on the proposal on July 14, however Councillor Kirby-Yung had not reviewed the section of the public hearing she missed. After a lengthy debate about how to proceed, Council referred the decision to the July 21st meeting.

A text amendment to the CD-1 (643) zoning at 1335 Howe Street. The proposal is to reconfigure some of the units of the building reducing storage areas that are excluded from Floor Space Ratio (FSR) calculations and increasing living areas which are included in FSR calculations. There is no change to the exterior of the building.

This may appear not to be a significant enough change to require the Council’s time or a public hearing. However, because the City relies on bespoke zoning for each new building, in the form a custom CD-1 zone, even minor changes require a new rezoning.

Part of the Cambie Corridor Plan, this project would add 22 homes in a six floor building at the corner of Cambie and West 37th Avenue. The project is a short walk from the Oakridge-41st Avenue Skytrain station, and across the street from Queen Elizabeth park.

If you wish to support these homes you can  write in support or request to speak.

At Rupert and 29th Avenue, 51 rental homes are being proposed under the Secured Market Rental Housing Policy, commonly called Rental 100. It is located a 1 minute walk from an Elementary school, across the street from a pre-school and a short walk away from Windermere Secondary School.

Please write in support or request to speak to let council know you support rental housing.

Brightside, a non-profit housing provider, is proposing to build 157 much needed social housing units for seniors along East 12th between Clark and Commercial Drive. 30% will be secured at rates below Housing Income Limits (HILS). It's very close to multiple parks and a 10 minute walk from Commercial-Broadway skytrain station.

Please write in support or request to speak to let council know you support social housing. You can use the BCNPHA letter writing assistant as well!

This proposal is part of the implementation phase of the Cambie Corridor plan. It involves rezoning 5 single family lots so that eventually townhouses can be built there. It’s almost directly adjacent to the Children’s hospital, across the street from a high school, and close by to the upcoming RCMP headquarters redevelopment.

This rezoning is being considered under the Rental 100 policy. It would be a 6 storey building, with retail on the ground floor.  It's a few blocks away from the PNE, and within a three minute walk of two elementary schools.

3. Amendments to the Zoning and Development By-law to Increase Rental Housing in the C-2, C-2B, C-2C, and C-2C1 Commercial Districts

This would “pre-zone” certain C-2 zones to allow 6 storey rental buildings, where previously only 4 storey buildings of either rental or condos were allowed, and would also allow 3.5 FSR for rental buildings. Rental rezonings in C-2 under the Rental 100 program are already fairly common, but this will make the process simpler and hopefully faster. The City recently gained the authority to specify optional ‘rental-only’ zoning and bonus density. Areas under the Cambie Corridor, Grandview-Woodland and Broadway plan are being excluded from this rezoning. 4 storey condos will still be an option for the owners of C-2 lots. 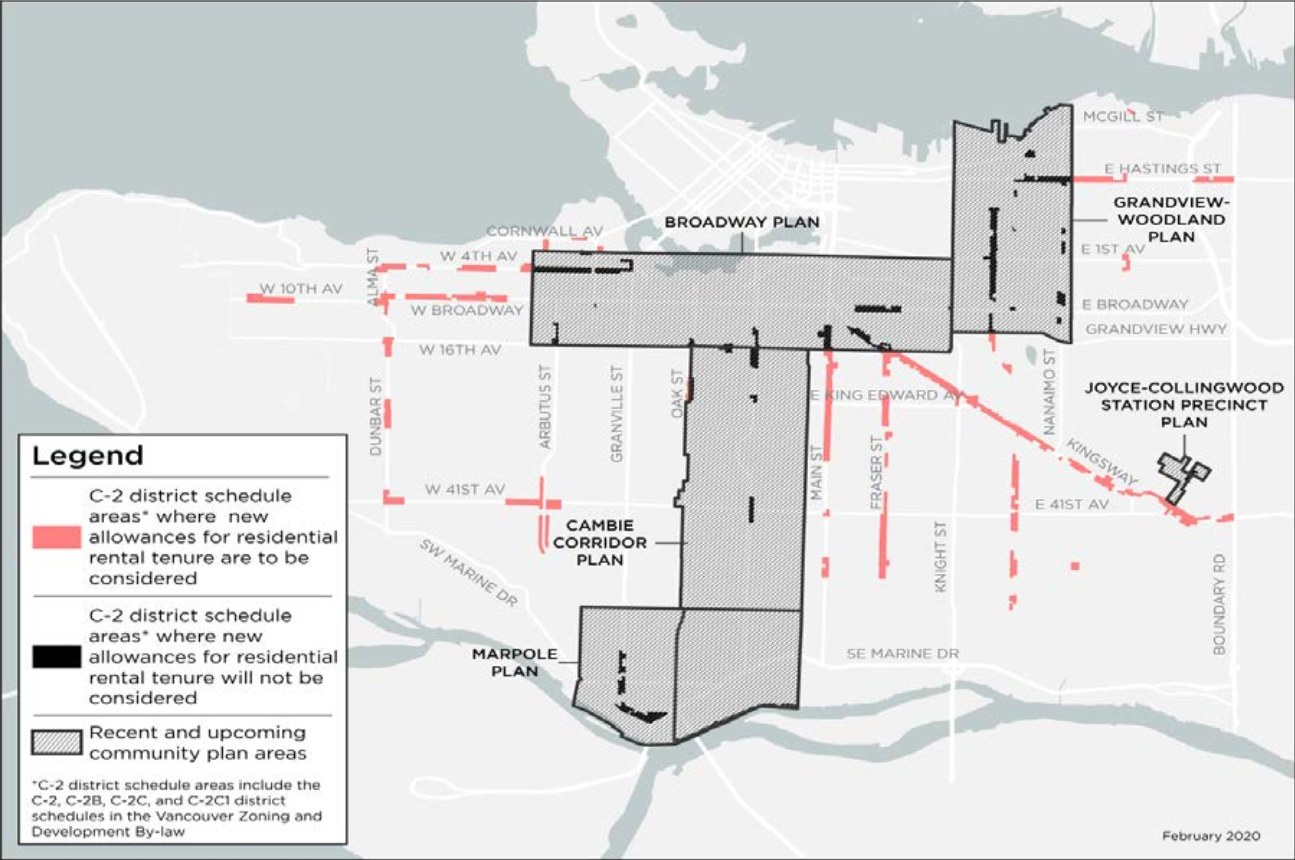 This plan is not expected to create a significant amount of new housing, but experts say it should convert some strata condo projects to rental. This is part of a larger plan by the city to encourage rental housing. Staff say that there are currently about 5 rental developments in C-2 for every 14 condo developments, and are hoping this pre-zoning could lead to as much as 2000 additional secured rental apartments over the next 8 years, but only if it can shift the balance to 8 rental for every 10 strata (condo) projects. While the new Secured Rental Policy perhaps appears rather underwhelming compared to the extreme shortage of rental housing, this is still a worthwhile step in the right direction.

The majority of residential land in Vancouver is currently subject to bylaws that ban all but the most expensive types of housing. Plans to ease those bans got rolled into the City Wide Plan at the start of this council term, despite continuing affordability problems.

Councillor Lisa Dominato is bringing forward this motion to direct city staff to develop a program to build pilot missing middle projects in the RS (single family) and RT (duplex) zones. These ground oriented pilot projects would provide a real world demonstration of housing types that can be incorporated into the Vancouver Plan that is happening concurrently, while preventing progress from being stalled out during the multi-year Vancouver Plan process.

The motion calls for a report to council by staff during the fall of 2020 with short term actions that can be approved by council and a report in the spring of 2021 with options for expanding additional housing options near transit hubs, arterial roads and to deliver more units than the existing Moderate Income Rental Housing Pilot Program (MIRHPP).

Please support this motion by writing to council or requesting to speak in favour (deadline to register to speak is 1 hour before the start of the meeting).

Ending Street Checks in Vancouver (Kennedy Stewart) - Asks council to direct the Mayor to write to the Police Board to request the ending of police street checks.

Enhanced Mobility Options to Support Post Pandemic Recovery Through a Shared e-Scooter and an e-Bike Pilot Program (Sarah Kirby-Yung) - Would direct staff to create a e-scooter and e-bike pilot program.

If you want to support these motions you can contact council or request to speak (deadline to register to speak is 1 hour before the start of the meeting).