Going into the 2022 election, the pro-housing movement has real momentum. More parties and politicians than ever are embracing the message: Vancouver needs more housing! But our city also faces an entrenched status quo, with slow-moving policy & permitting processes and an organised anti-housing movement. It’s more important than ever for pro-housing voters to get out and vote!

Young people and renters are particularly underrepresented in Vancouver politics. Please support people in getting out to vote!

Our top picks are based on parties’ housing platforms, parties’ voting records, candidate profiles, and track record of involvement in the pro-housing movement. 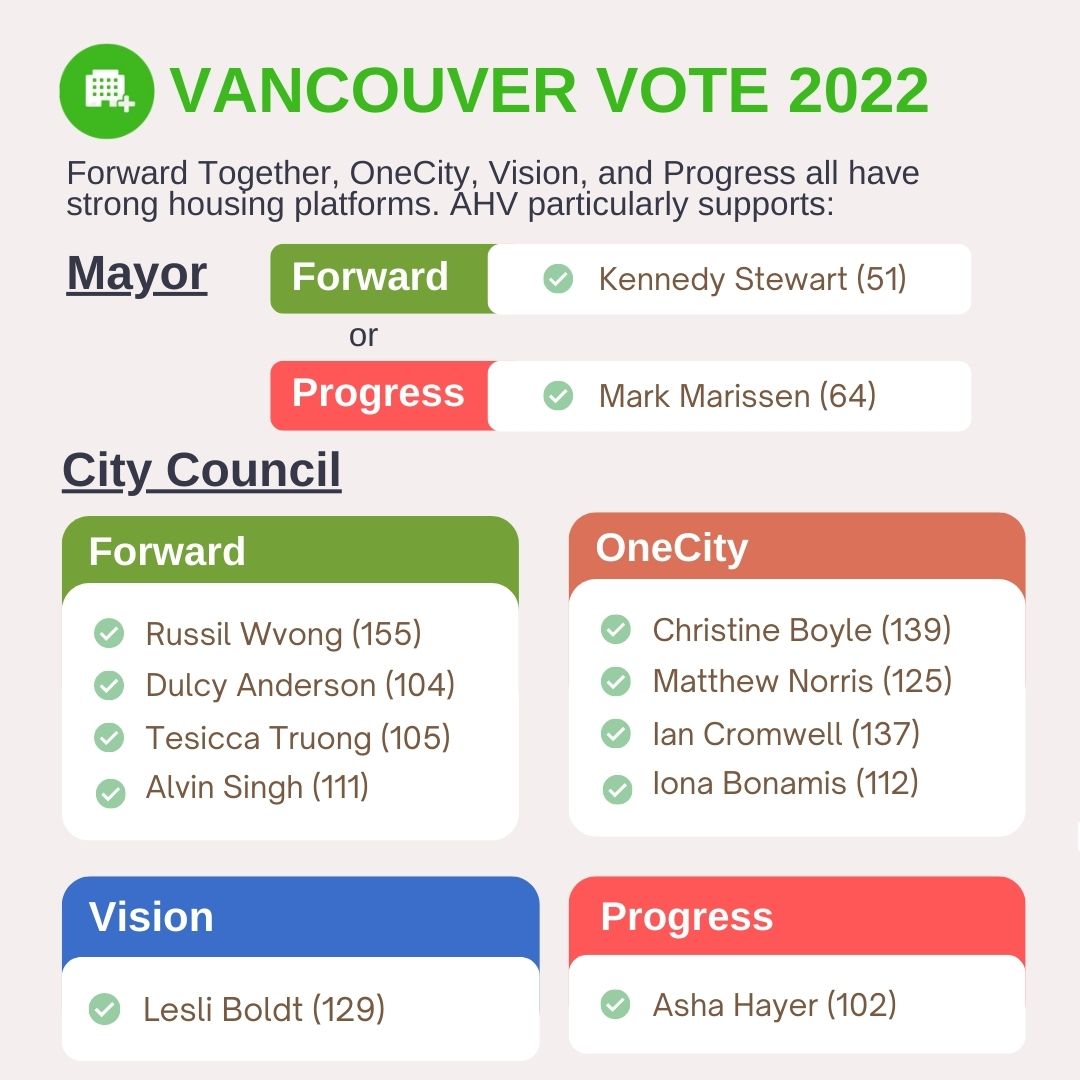 Kennedy Stewart (Forward Together) - 51 on the ballot

Mark Marissen (Progress) - 64 on the ballot

For council, we generally support candidates from Forward, OneCity, Progress, and Vision. All of these parties have strong housing platforms and records. We particularly support (in ballot order):

Our recommendations are focused on housing. Depending on your voting priorities, swapping in other candidates from Forward, OneCity, Progress, and Vision will still ensure a strong pro-housing ballot:

We urge voters to avoid TEAM. Colleen Hardwick of TEAM was the most anti-housing councillor, by far, during the previous term.

Before platforms were released, Abundant Housing Vancouver released priorities we would like to see in every party’s platform.

We are specifically judging housing platforms ONLY. You should absolutely look at parties’ platforms to find out their positions on other issues you are concerned about.

Record: Over the last 4 years, Christine Boyle was the best councillor on housing. For both individual housing proposals and policy reform, Christine Boyle was a reliable pro-housing vote. Her motion to pre-zone certain areas for up to 12 floor non-profit, social, and co-op housing was an important effort at legalising housing, which was sadly defeated.

Housing Platform: “You Belong in Vancouver”, which lives up to the promise of its name. OneCity is clear: they want to end the apartment ban. Combined with renter protections and a recognition that dense, complete communities are also important for responding to climate change, OneCity’s platform is strongly pro-housing and pro-affordability.

Record: Vision Vancouver implemented many of the policies the current council relied on to get housing built.

Housing Platform: Their platform includes a promise to “reform city-wide zoning to open up all neighbourhoods to low and mid-rise homes.” That’s music to our ears!

Record: Mark Marissen has a record of strong housing views and the need to combat urban sprawl by building more housing in the City of Vancouver. Asha Hayer and David Chin have made a notable effort to listen to “urbanist” concerns.

Housing Platform: “Housing for All” – a very strong set of priorities. The platform includes a promising mix of protections for renters, strengthening the Vancouver Civic Housing Corporation to build mixed-income housing, and legalizing 6 storey rental apartments and 4 floor condo apartments throughout the city.

Record: Kennedy Stewart has a strong record on housing during the previous council term on not only individual housing proposals and pro-housing policies, but not wasting time on stalling tactics.

Housing Platform: Forward’s signature campaign promise is to triple the amount of new housing in Vancouver: 220,000 new homes over the next ten years. This is an ambitious goal, and we would prefer to see more detail on how they will get there, but it’s a strong commitment that demonstrates an understanding of the severity of Vancouver’s housing shortage.

Best of the Rest:

How did we assess voting records? See the comparison here.